Written by Academy Award® winning writer Mark Monroe and executively produced by Academy Award® winners John Battsek (One Day in September) and Simon Chinn (Man on Wire), The Summit tells the story of the deadliest day in modern mountain climbing history. In August of 2008, 22 climbers from several international expeditions converged on High Camp of K2, the last stop before the summit of the most dangerous mountain on Earth, Mount Everest. 48 hours later, 11 had been killed or simply vanished into thin air. Like a horror movie come-to-life, it was as if the mou 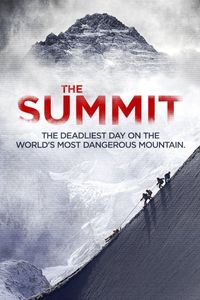